Staring down at a human, the size of a trinket statue you would see inside someones hutch, it’s hard to imagine it surviving.  He had a full head of hair and was completely proportional.  Many of the nurses commented on how good he looked as most babies at 24 weeks look like “alien babies”.  He was very pink and his skin was so thin you could almost see through it.  There was not an ounce of fat on him.  Pure skin and bone.  We could see his full rib cage and all.  The doctor placed an ointment over the baby’s eyes and just as I was about to ask why he hadn’t opened his eyes yet the doctor read my mind and explained that since the baby is 24 weeks old his eye lids are still fused together and he cannot open his eyes for another week or so.

After all of the commotion from the birth and stabilizing the baby the doctor pulled us out into the hallway.  She explained to us that Beckham could not stay here at the hospital as they were not equipped to handle a baby that was this small.  He needed a NICU level 4 and they only had a level 2 NICU.  This meant they needed to transport him to another hospital.  The transport team would be notified and needed to prepare.  While that was happening the baby needed to be brought up to the NICU to stabilize with meds and more.  He would be taken to Texas Childrens Hospital in the MED center which was a good 30 minute drive from where we were.  I had a small heart attack just thinking about how on earth he would survive that!  She wasted no time getting him out and to the NICU and before we knew it we were standing in an empty room, our surrogate sleeping and still under anesthesia, her daughter and boyfriend by her side.  We went and sat down as a nurse walked in a pulled a curtain around them.  Josh and I sitting in the dark staring off into territory we could not fathom we were in.  The nurse brought us some water and graham crackers.  Everything began to sink in.  I took out my phone and began to search survival rates of 24 seekers and pretty much anything I could find.  As I read more, I spat off details to Josh.  “It says here he has a 25% chance or survival and even then there would likely be major medical complications”.   “We need information on his length and weight to determine better.  How did this happen?  I didn’t know babies could be so small.” After about an hour or so I turned to Josh and said  “we need to call people, or at least the grandparents.”  He said to wait until “we know more about what’s happening, we don’t even know if they can fully stabilize him yet.”  I got up to leave and call my best friend Amanda.  The one person I could always talk to.  I needed to talk to someone.  I went into the hall and there was no answer, I left a message and returned to the room.  The wait was unbearable.  I turned to my husband “What are we going to name him? He needs a name”  We were down to two names at the time Greyson and Beckham.  The decision was quick, we were both leaning towards Beckham and already had a middle name picked out.  “Beckham Max, it’s perfect.”

1 hour later they needed to work with our surrogate and we would all need to go wait in the waiting room down the hall.  We moved to the area with few chairs and some water cups.  Our surrogate’s boyfriend clearly not knowing what to say and we just couldn’t talk.  Her daughter was completely wide awake like she had gotten a great full nights sleep.  It was about 4AM.  I needed to stop with the thoughts running through my head. I needed a distraction.  The surrogates daughter wanted to play a game so I got up and said “ok, I’ll play!”.  We started with a cupcake making game on my phone that I had for my daughter but we were getting antsy just sitting around.  So we decided we should go skipping through the hallway, but very quietly because people were sleeping in the rooms around us.  Back and forth we went skipping as she told me stories and talked about princesses, her favorite being Elsa at the time.  It was the best distraction in the world.  A nurse came by to escort us to the waiting area outside the NICU.  It was just a bench with a window to the left where you could see all the healthy babies and a door across from us with warning stickers all over it.  That’s where our baby was.  They told us they would be bringing him out there once he was ready to be transported and we would get a chance to see him before they loaded him in the ambulance.  “Hopefully he will be ready soon, they are still working to keep your son stable”.  I took a deep breathe and they left.  I turned to our surrogates daughter and said, “let’s look at the babies!”.  We peered in the window at what things could have been.  This was not us.  It would never be us.  I thought about everything we were missing everything we had hoped for.  The birth experience with the surrogate, the happy arrival of our son with happy tears.  We lost all of our hopes and dreams we had had for welcoming our baby to the world.  Time for a change.  “How about hide and seek?”  There really wasn’t anywhere to hide other than around a few corners by the hall but that was all we needed.  Every time I would go around a corner or she would we would say in an excited whisper “I found you!” and she would die laughing.

Another hour passed and we had heard nothing.  We knew the plan so we decided to call the grandparents and let them know.  All of them in utter disbelief and not knowing what to say.  What do you say?  There are no words that could make it any easier.  We told them we would keep them posted.  I constructed an email to my boss explaining in few words the situation and that I would not be in and would keep him posted and Josh did the same.  Back to the waiting room and I was getting worried.  Why was it taking so long?  Just as I was at my whits end they came out and said they were almost ready.  The issue they were having was getting his temperature warm enough and sustainable for the ride.  He needed to be able to handle the 30 seconds where he would be moved outside to the vehicle.  He was almost warm enough.  They had us move back to our surrogates room where they would bring him on the way out so we could all see him and say our goodbyes.  Our surro was slightly awake and still groggy.  Her boyfriend brought her up to speed as we waited anxiously.  I Looked at my phone and it was now 6:30 AM.  I started to panic as I looked at my husband and said “It’s rush hour, it’s going to take us at least an hour to get their now, he has to be in the ambulance longer, that makes me nervous.”.  Moments later a crew arrived and we once again were surrounded by people.  What looked like a massive stretcher, which was really just a normal sized stretcher, covered in yellow and black was holding a little plastic box with portholes on the side.  Inside, the tiny baby who looked even smaller than before.  He was covered in wires and tape and straps and not moving.  My heart couldn’t handle the sight.  “Take deep breathes.. ” I told myself.  He was an angel.  Someone asked “Does he have a name?” and we responded “Beckham Max” as everyone nodded with their approval of the name.  He was rolled over to the surrogates bed so she could see him.  “He looks amazing!” she said as the doctors pulled us aside. The doctors and nurses walked us through the procedure and where to go once we arrived to the hospital.  Floor 4, NICU Level 4, check in at the front desk, you will have to fill out paper work, by the time you are done he should be ready for you to see him.  They handed me a paper with his footprints that was to act as a temporary birth certificate.  I would need to gather all of our legal documents for us have him in my name etc.  I completely forgot.  Legal documentation… we had completed for the state of Texas that would allow me to be on the birth certificate as the mother.  It was the least of my worries.  It was time to go.  They allowed us to open the port holes and touch our baby boy for the first time and take a quick picture.  He was brought out and we gave our final hugs and goodbyes to the surrogate and headed for the car.  7AM.  We got in as I mapped the location.  It would take about a hour with rush hour traffic as I had predicted.  We were so completely drained and came across a Starbucks on the way, went through the drive through and got coffee and food for the drive.  I figured it would be a while until we would eat next anyway.  Another unbearable drive.  I kept saying to my husband over and over, “how is he going to survive the drive?  I hope he did ok when he was outside cause it’s so cold”.  Every bump we hit on the road made my stomach cringe to think how it would effect such a small human.  We moved slowly through traffic and the longer the took the higher my blood pressure would increase.  Why can’t we get there any faster? and just like that we arrived.  Texas Childrens NICU level 4. “We are here for Beckham Max, We are mom and dad”. 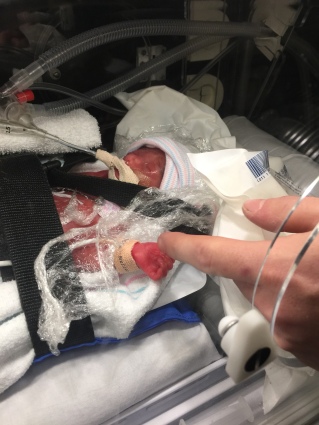