WARNING: This blog post contains graphic details and pictures that may make you squirm!

I woke up one morning not feeling quite right.  I attributed this feeling to the Chiari because that’s what I figured was causing any ailment I may have had at this point.  I had some abdominal cramping, similar to that of my period about to start.  It was definitely a bit early for that, but whatever I had endometriosis and PCOS therefore never a normal period.  Sure enough later that day I was spotting a bit, but the pain was terrible, and something was not right, I just knew it.  I called my OBGYN to see if she could squeeze me in and she said to come right in so they could take a look.  Now if you’re a woman either you get very annoyed by these appointments because of the uncomfortableness of them, or you just flat out dread them and want to get them over with.  When you’re a woman that has to have these appointments more often than 1 year, then it is the latter.

She checked me out and said we needed to do an ultrasound to see what was going on. According to the symptoms it might be another cyst, maybe that had ruptured.  Ultrasound techs are never good at hiding things.  As she was looking around and taking measurements I could see the concerned look on her face.  Great… another cyst…  The doctor came in to speak with me back in the patient room.  “So, it appears you are about 6 week pregnant.”   My heart dropped…what???  I couldn’t believe it.  I thought it was impossible for me to get pregnant without fertility drugs!  This didn’t last long. She continued, “Something, however, doesn’t quite look right.  At first glance at the ultrasound I thought you had a growth or tumor of some sort, when I realized you were pregnant, I suspect a possible chromosomal issue.  We will wait a few weeks and see how things go, but I am not sure this pregnancy will last.”  To this day I still cannot explain all of the emotions and thoughts that run through your head when you hear anything about a pregnancy potentially not lasting.   How was I supposed to react?  How was I supposed to absorb all of this information.  What did it mean?  Could this pregnancy even last?  What the hell do they mean by chromosomal issue?   As always in a tough time, I called my mom frantically crying, trying to explain to her what the doctor told me, but I still hardly knew what she said.  If there’s anything I have learned in all my experience with doctors, it is to write everything they say down.  I cannot stress this enough.  I didn’t that day.

Seven days later, April 1 2008.  The bleeding started again.  I felt weak and knew this was it.  As I got up I realized the extent of the bleeding was much worse than I anticipated.  So much that clots were falling out, this was bad.  The doctor met me at the hospital. By the time we got there I felt as though I were going to pass out.  The doctor explained I would need to have an emergency D&C.  They would remove the baby and fix me up but they needed to move now, my blood pressure had dropped to 55 over something?  I was near death.  Everything from there was a blur.  It all happened so fast, and I was in such a state over the next few days I have very little memory of anything then until…

April 28, 2008 – It was time.  The big surgery.  I wasn’t sure if it would be possible after the miscarriage but the doctors said there was no issue, so I wanted to keep the date.  I wanted the surgery.  I had to be at the hospital early as prep would take a while.  They would need to run blood tests, and there’s the matter of shaving the back of my head.  Waking up early didn’t phase me, I didn’t get any sleep.  I was about to have my head cut open, the base of my skull removed, and part of my vertebrae removed… how could I sleep?!  Surgery was set for 10.  I kept telling myself as I was being prepped I was ready, but truth be told nothing, and I literally mean nothing, could prepare you for this.  I was ready to go, just waiting for some blood results when the doctor came by.  The surgery would have to be pushed out to 3PM as my potassium was low and they needed to replenish it.  They would start it slowly in the IV and see how I would react.  IV potassium is one of the most potent things you can put in your veins which is why they needed to start this slowly.  The nurse walked me through it, they would numb the area first before putting a little in at a time.  I figured that would help.  They put in a tiny bit, and the second it entered into my veins I was screaming.  It was like they took a torch to the inside of my arm and flooded my veins with fire.  It hurt so bad!!  They doubled up on the numbing medication and tried again. ahhhhh!!!!!  There was no difference.  They were not getting potassium into my system this way.  So the doctor came up with a new plan.  They would knock me out, put in a central line (an IV in the artery of your neck that goes straight to your heart), give me the meds and then get me in for surgery.  This way the potassium would work more quickly anyways.  IV in the neck are you kidding me?  That alone scared the living daylights out of me, thank goodness they would knock me out before putting that one in!  lol  and off I went, again…99, 98, 97…

I vaguely remember waking up from surgery and having a nurse check on me.  She explained to me that I was in the ICU, which meant I would not be able to have visitors.  I don’t know if they explained to me before the surgery being in the ICU after the surgery but I was there for monitoring as it was a major surgery roughly 4-6 hours long.  I was officially a “Zipper head” the term for all who have the Chiari surgery as the staples in the head look like it was zipped up.   I don’t recall but I was in the ICU for two days, 6 days total in the hospital.  All I can tell you about those days in the hospital are the many stories I have heard.  I remember nothing, and I’m glad because it sounded awful!  My mother was pretty freaked out, and concerned the doctor had accidentally knicked my brain.  As she and many who visited explained, I had a complete personality change.  Every time someone would walk in I was either overly outgoing and “ghetto” or pissed off.  I would speak in a manner my mom had never heard before to the nursing staff, which apparently they got quite a kick out of.  As I received get well goodies I would make rounds and deliver cookies etc to people on the floor (this I don’t think was out of character for me at least!).  The weirdest episode was when staff were delivering my dinner for the day.  I had ordered spaghetti with no mushrooms.  I really hate mushrooms.  When my dinner was delivered there were mushrooms on the pasta.  I proceeded to pick up the plate and throw it across the room while screaming “I SAID NO MUSHROOMS!!!”.  By this point my mom demanded to see the doctor and talk about the personality changes.  He suggested this could potentially be from some of the medications they had me on assisting with the cerebral fluid flow.  These medications may have adverse effects. They took me off and started me on something new.  24-48 hours later I was back to normal.

Over the next 6 weeks I would be recovering.  For several weeks I couldn’t walk around much.  If I moved I needed a cane for support.  It would take time for me to get back to normal.  That 6 weeks ended up being a 9 week recovery.  Before I knew it that time had passed and I was 100%.  I mean no symptoms, feeling amazing, 100%.  Perfectly normal.   If I am going to be honest I think the timing of the surgery couldn’t be more perfect.  It allowed me to quickly move on from the miscarriage experience as I had quite enough going on, not to mentioned the positive outcome. This surgery changed my life.  I have since to have any major issues from the Chiari. There is always a chance to have to have further procedures but thus far (Knock on wood) I am great in this area!

2008 from then on would prove to be an ok year for my health.  Would I still have kidney stones? Yes.  Would I still have issues with endometriosis and PCOS?  of course!  But I could manage.  That’s what you do when you have chronic illnesses.  You manage.  You put on a face, so everyone can see you are ok, whether you are or not, and you suck it up.  You suffer inside, and are careful to let anyone else know on the outside.  Why? because truth be told, people that don’t go through it don’t understand it.  They never will, until they experience it.  They sympathize or they cut you off if they ever see it.  Occasionally a few will hang in there with you as long as they can, but not many can.  The next and final portion of the background series I will sum up 2009-present day.  Chronic illnesses continued, friends lost, divorce, and the good stuff, friends gained, perspective gained, and a changed outlook on life.

Attached below are pictures from after the surgery. 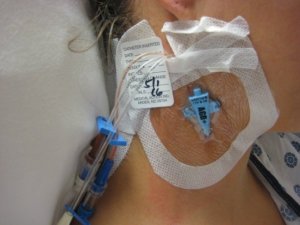